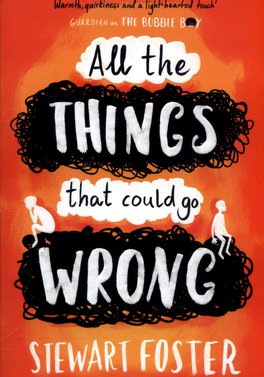 All the Things that could go Wrong

Alternating between the point of view of The Bullied (Alex) and The Bully (Dan). Alex has really severe OCD and Dan has various home problems, but you find yourself rooting for both boys from the beginning.

This book is one of my favourites. It's incredibly moving and made me tear up, the fact that it has two sides of a story is amazing. In my perspective this book can give hope to a bullied child or a child with OCD. This book shows a child with serious OCD getting bullied (by a group of people) and one bully who is having a hard time at home, (because his brother has got arrested and went to STC) but a raft called the shooting star (the bully and his brother were making the raft before the brother got sent to STC) brought them together.

I didn't like the sound of this book at the beginning but the story and characters grew on me quickly . I feel I can sort of relate to the thoughts Dan had about his brother going away and found this book very interesting.

A brilliant book for everyone, everyday struggles people can relate to. Alex and Dan both overcome their problems and prove that we can overcome ours. Brilliant book i would definitely recommend it

I thought that this book was an amazing book idea that was executed perfectly however I felt that I did not connect with the character Dan at all. He was a clever boy and I thought he should have had something larger happen to him. I really enjoyed learning about Alex’s OCD.

This is a great book that can really give you an insight into what it is like with mental health issues and how hard it can be . I really liked reading this book and didn't want it to end and highly recommend this book to everyone.

I enjoyed the book as it was quite descriptive and described each characters' feelings. The setting was described well and I felt like I was actually there. But the book was slightly bit rushed at the end, I feel. I liked the book because it could be a real story and is has relatable dilemmas in it.

I really liked this book. It shows that people always don't know the reason for why someone is doing something, whether its because of problems at home or a mental disorder. I recommend this to anyone looking for a story with a good ending.

I really enjoyed how I you could feel the characters in this book, you really felt you were there and you were watching. Some bits of the plot just seemed to trail off but the overall book had a good effect.

I recently had the chance to read this amazing book by Steward Foster. its about two boys called Alex who has O.C.D and the other one Dan who always picked on Alex at school Dan had a gang of bullies called Sophie and Goerge.C and Goerge.w they always picked on Alex at school but Dan had to work with Alex with Dan helping him with shooting star over the summer holidays what could possible go wrong.

This was a story about change and realization. First you have Dan who believes that the place that Ben has been sent to is not really that bad and that Shark Face (Alex) is almost trying to push his presence on Dan when in reality this is far from the truth. They both seem to believe that the other's life is better than their own, and then they come to realize how similar they are. Overall, this was a great book that reflects the pre-teens of today perfectly.

I really enjoyed the book and the story told was amazing and had a deep meaning. I liked the way the perspective of the writing changed between characters.

I enjoyed the book and liked how the story was shown from two points of view. I also liked the story line and would recommend the book to someone, although I feel that the ending was a bit rushed.

This is a great book. Written in the perspective of bully's and the victim. It's about a boy being bullied because of his OCD but then becoming friends after working on something together. This book is brilliant because it can refer to real life with the bullying aspect and then eventually becoming more friendly towards each other after doing a project that they both enjoy.

This was one of those few books that I would enjoy reading again. This book isn't just a excellent read, it shows how some people aren't as lucky as others, and that the smallest of problems can become larger just by bullying. Now I know after learning the backstory and inspiration for this book was based on one of the authors friends I can understand how hard it truly is for the characters in the book with OCD and other problems. I would definitely recommend this book to all ages.

I think all the things that could go wrong was a really interesting book, and the thing about it was that it could happen to anyone in real life. Seeing these two boys with these different problems and how they managed them was what defined their characters, which is another thing that really stood out as well. I also liked seeing both sides of the story, as it helped me to understand a bit more.

This book was really good and I enjoyed the two parts to one story.

I really enjoyed this book but it went on and on! It would have been better as a short story rather than saying the same thing again and again.

This was a great book because of the message it had about bullying and how it is a real problem that is increasing all the time.

This is a very brilliant book that shows the story from the perspective of both the main characters. It is really emotional and easy to follow with a beautiful ending. I really liked it.

'All the things that could go wrong' is a brilliant book! Alex is struggling and Dan is angry his brother was taken away. The boys mums arrange to finish a raft Ben and Dan have started. I would definitely recommend it to anyone.